And a time for thanksgiving here, too. We should be grateful to survive, individually and collectively.

I made my first coffee before heading for the shower, and brought a mug to Oksana at the same time. She was actually stirring, so I left her to it. I showered and dressed, then made a breakfast of fruit and yogurt.

Oksana emerges for her breakfast, dipping her toe in the day and finding it not entirely unsatisfactory. We chat as she eats. Confirm that we both want to go to the Lesia Maruschak exhibition at the National Museum of the Holodomor Genocide, in The Park of Eternal Glory.

Neither of us has visited the museum before. Stranger for Oksana than for me, considering she actually grew up in the city.

We will go in the afternoon.

I clear up the breakfast things while Oksana showers and gets dressed. I have no lectures scheduled for today, so I can concentrate on reading and essay writing.

This gets me through the morning, and we break for our exercise session around 12:30. We limit the session to forty five minutes, then shower. While we are still in our robes, I heat up some chicken soup for lunch. It is unlikely we will be able to get anything when we are out.

We dress warm, climb into our best boots and head off for the museum. It is quite a trek to the park and then up to the memorial. It is easy to forget that we are quite a hilly city in parts.

The approach to the museum entrance is guarded by this statue of a starving girl. It is called The Bitter Memory of Childhood. 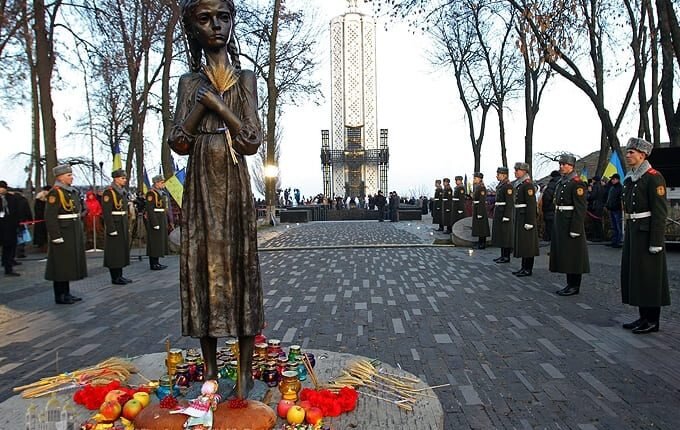 You can see from the photograph that people leave bread, fruit and other foodstuffs at her feet, as well as candle jars. Candles are very important in memorialising Holodomor. The coming weekend, most Ukrainian households will display at least one candle in a window as part of the national remembering.

In August this year, just before Independence Day, the statue was torn down by "vandals" who were subsequently identified as anti Ukrainian activists.

Towering above the entrance to the underground museum is the Candle of Memory. 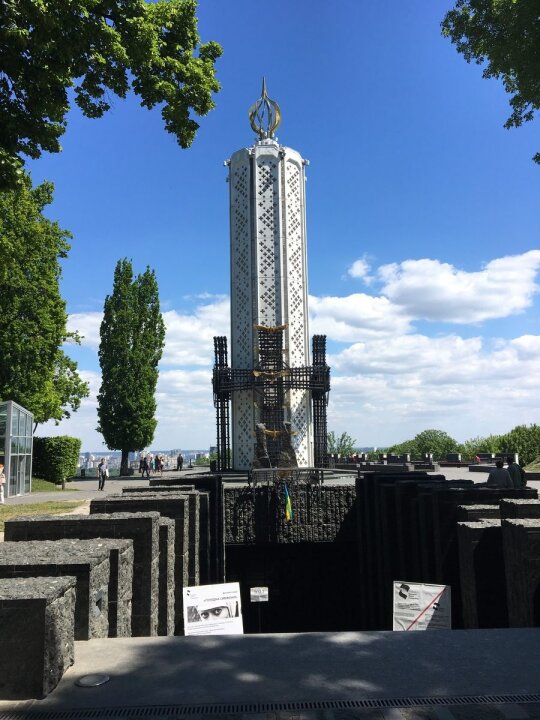 The museum hall itself is moving in its simplicity. Some domestic items typical of the country people at the time of Holodomor. Some examples of the types of farm implements they used. There are boards displaying the names of fourteen thousand towns and villages that suffered this genocidal activity between 1932 and 1933. Most scholarly studies estimate the death toll to be between 3.5 and 7 million people. The consensus is that 3.9 million certainly died, but it is impossible to calculate an upper limit.

For a good history of Holodomor in English, I would recommend Anne Applebaum's 2017 book [i]Red Famine.[/i]

Maruschak's installation is strangely absorbing, consisting mostly of a collection of photographs and some film projection. I will use her own words to describe it.


[i]Project MARIA memorializes victims of the 1932-33 Holodomor - famine-genocide - in Soviet Ukraine, where millions died. The Holodomor was political and intentional; a state-sponsored assault on a single ethnic group as part of the Soviet Union’s new socio-economic model that required the subjugation of a sizable population whose national consciousness stood in the way of the new order. At its center is a single vernacular image of a young girl, Maria F., who survived and currently resides in Canada.
Produced across platforms including books, installations, textile sculptures, performance, lectures and film, the project manifests my intellectual and emotional response, informed by current research and the survivors’ stories I read witness testimonies including that of Tetiana. She recalled that her sister, “had a large, swollen stomach, and her neck was long and thin like a bird’s neck. People didn’t look like people — they were more like starving ghosts.” These accounts made such an impression on my young mind and I’ve carried them with me throughout my entire life as I searched for my identity as a Canadian of Ukrainian descent.[/i]

It is difficult for me to judge its impact in another, less pertinent, location, on a less engaged audience. Seeing it there, and so close to Holodomor Remembrance Day, I found it very moving, as did Oksana.

We were quiet on the walk home. We did not hurry, despite the cold. It was quite dark by the time we were back in the apartment.

I did not feel like cooking a meal, so I heated up the rest of the chicken soup and we shared that with toast and cheese. We had a glass of wine each and settled down to think about the day.

The news remains uncertain about another lockdown, though I would guess we are moving in that direction. Belarus is imposing sanctions on our officials, in retaliation for our joining the EU sanctions on Lukashenko's regime. He is now, more than ever, Putin's puppet. And we have, apparently, entered into a joint venture with Turkey to produce combat drones. I wish that didn't make so much sense, militarily.

We drank a second glass of wine. Then we decided to shower and go to bed.

KiwiBird · 31-35, F
The Holodomor Genocide is just horrific...
Estimates from what aI have read range from 3.5 million to 10 million. While the lower numbers are more accepted probably because they can be proven who knows what the actual numbers were. Probably closer to 7 million.

While we are all aware of the holocaust and the Jewish deaths...we are not taught what happened in Ukraine. Shame...shame.

I am glad you got to see the Lesia Maruschak exhibition.
+ 2

SirfurryanimalWales · 61-69, M
Holodomor was a shameful episode in your history.
One of many in the Europe of the time.
And I am sure many people have never heard of it.
I know a fellow Welsh person hadn’t until yesterday.
I hope Gareth Jones is mentioned somewhere in the museum.
Sombre though it was it is good to get out.
+ 3

SirfurryanimalWales · 61-69, M
😱🏴󠁧󠁢󠁷󠁬󠁳󠁿[@156315,Yulianna] oh yes....forgot him.
There are several 19th Century industrialists but I’m not sure they are Welsh.
Gwynfor Evans....got us our Welsh Language TV station.Went on hunger strike for it.Thatcher feared the reaction if he died and gave in on the issue
+ 0 · Reply · Nov 27, 2020
Edited: 5 mths ago

SirfurryanimalWales · 61-69, M
[@156315,Yulianna] This a quote I remember about Stalin which I used when writing about him in my History Finals.A bit of a pet topic for me was Stalin.It was how I learnt of Holodomor.

‘Stalin was a great man,but only great within his incredible criminality.A criminality seemingly without end’
George F.Kennan said that....it sums him up.
+ 0 · Reply · Nov 27, 2020
Edited: 5 mths ago

basilfawlty89 · 31-35, M
It's of the reasons I left Marxist-Leninism. The denial of the Holodomor was too much for me (not to mention I was never that on board with authoritarianism and state-socialism/state-capitalism). I can't stand people who deny genocides. One of the biggest things for me for example is recognition of the Armenian Genocide.

basilfawlty89 · 31-35, M
[@156315,Yulianna] well, Anarchism isn't what people think it is. We just argue that the businesses should not belong to shareholders or owners or the state, it should be democratically owned and managed by the workers. We also don't think there should be politicians, we think there should be direct democracy.
+ 1

Yulianna · 22-25, F
[@23671,basilfawlty89] yes, i do understand that, but for direct democracy, i would ask you how that would work in the dystopia of trumpian America, where it would quickly degenerate into mob rule. and there's always someone ready to manipulate the mob.

in all such "cooperative" enterprises, business or political, human nature dictates that leaders soon emerge to help the people, because the people are lazy and don't want to make the effort to help themselves.

offer them bread and circuses and they will follow you dumbly.

for anarchism to thrive, human nature must change, and that brings us into the realms of eugenics. you will have to breed a super human who can enjoy the fruits of anarchy.
+ 1

basilfawlty89 · 31-35, M
[@156315,Yulianna] I'd wholly disagree with you. Some of the most successful companies have worker's cooperatives which work on that model. In fact there's far more incentive for people to work if they're not under wage slavery and instead earn profit - they actually get the fruits of their labour and the harder they work, the more money comes in.

I could point out in the traditional company, you get incompetent managers - a democratic workplace will give people the right to remove such a person from power. They could vote. Not everyone on the board of directors or shareholders are necessarily qualified, but they get to vote. Why should the people who are actually making the product not get the right to vote?

As to mob rule, that's largely a myth. An Anarchist society will still have laws and a constitution people will abide by. Communities join or leave voluntarily in a voluntary confederation. Direct democracy doesn't mean majority decision making as such, it actually refers to consensus decision making in a grassroots fashion.

Let's take a practical example - Rojava. Rojava is based on Libertarian Socialist principles inspired by Anarchism. There isn't mob rule and in fact it's one of the few places in the Middle East were women are equal and LGBT rights are protected.
+ 0 · Reply · Nov 27, 2020

i was unaware of Rojava so thank you for bringing it to me. a quick google suggests it is not an expression of anarchism, but anarcho-socialism. it does have many very positive aspects and i will study it more.

mob rule is not a myth, it happens all the time on a small scale, from playground bullying to hooliganism to street riots. often by people claiming an allegiance to anarchism.

people are not deliberately incompetent. incompetence is a function of human nature. do you know the Peter principle? and the same incompetence will afflict cooperatives.

sorry, i am not sure why this response has become detached from your post.
+ 2

Some are mutualists - who believe there should be free markets, but the businesses should be owned and controlled by the workers.

Some are collectivists - who argue there should be a market, but it should be intervened by via the community and have a community market.

And finally the most common are Anarcho-Communists - who believe we should do away with money and markets altogether and instead work on a gift economy.

All different forms of socialism and all are united by their opposition to the state.
+ 1

sarabee1995 · 26-30, F
The human capacity for horror is at times unfathomable to me. It would be easy to write Stalin off as a madman. Crazy. Deranged. But the implementation of the Soviet system under him required the collaboration of millions. What do we make of them???
+ 1