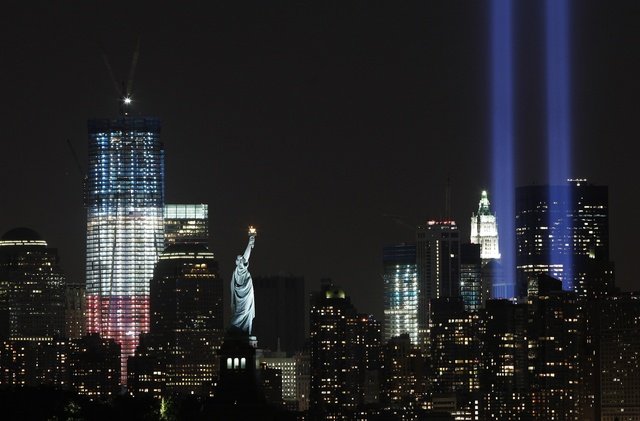 Mulder · 36-40, M
Yet people rarely remember all that happened the day before that

The next morning the Pentagon is hit in the exact location where budget analysts were trying to track down the missing money, killing analysts and destroying records.

Claims that Tom Kenny mistook the arrival date are refuted by the fact that the interview with Dan Rather was on Wed. Sept. 12 and he accounted for Monday night, Tuesday, and that day (Wednesday). "We arrived on late Monday night, and went into action on Tuesday morning. And not until today did we get a full opportunity to work the entire site." Furthermore, former NYC mayor Giuliani testified to the 9/11 Commission: ""... the reason Pier 92 was selected as a command center was because on the next day, on September 12, Pier 92 was going to have a drill, it had hundreds of people here, from FEMA, from the Federal Government, from the State, from the State Emergency Management Office, and they were getting ready for a drill for biochemical attack. So that was gonna be the place they were going to have the drill. The equipment was already there, so we were able to establish a command center there, within three days, that was two and a half to three times bigger than the command center that we had lost at 7 World Trade Center. And it was from there that the rest of the search and rescue effort was completed."

According to CBS News, in the afternoon before the attack, “alarm bells were sounding over unusual trading in the US stock options market.” It has been documented that the CIA, the Mossad, and many other intelligence agencies monitor stock trading in real time using highly advanced programs such as Promis. Both the FBI and the Justice Department have confirmed the use of such programs for US intelligence gathering through at least this summer. This would confirm that the CIA should have had additional advance warning of imminent attacks against American and United Airlines planes.

Plans for military action in Afghanistan were on President Bush's desk two days before 9/11 and Sept. 10.

Backup Communications System Was ‘Miraculously’ Switched on for ‘Exercise Mode’ and Ready for Use on 9/11. From research by 911 blogger Shoestring.

On Sept. 10, Brigadier General W. Montague Winfield asked Capt. Leidig to temporarily take his place as Director of Operations at the Pentagon Command Center on the morning of 9/11.... from 8:30 am. until after Flight 93 crashed, whereupon Winfield resumed control. Leidig had qualified to stand in that position just the previous month. Winfield was promoted to Major General.

September 10, 2001: US Generals Warned Not to Fly on Morning of 9/11
According to a Newsweek report on September 13, “[t]he state of alert had been high during the past two weeks, and a particularly urgent warning may have been received the night before the attacks, causing some top Pentagon brass to cancel a trip. Why that same information was not available to the 266 people who died aboard the four hijacked commercial aircraft may become a hot topic on the Hill.” [Newsweek, 9/13/2001] Far from becoming a hot topic, the only additional media mention of this story will be in the next issue of Newsweek: “a group of top Pentagon officials suddenly canceled travel plans for the next morning, apparently because of security concerns.”
3 · Reply · Sep 11, 2019 | ·
View 2 more replies »

SatyrService · 100+, M
nor will we ever knw the whole truth.

There is a portrayal, of the events leading up to this moment called
"the Looming Tower"
the story of the men and women w[i]ho knew about these terrorists, and tried to do everything to stop them[/i], only to be held back by political posture and infighting in the FBI, the CIA and 2 white houses. ten episodes