Are you a Biblical Christian (Ekklesia) or a Modern Churchian?

Look at this chart and tell me: 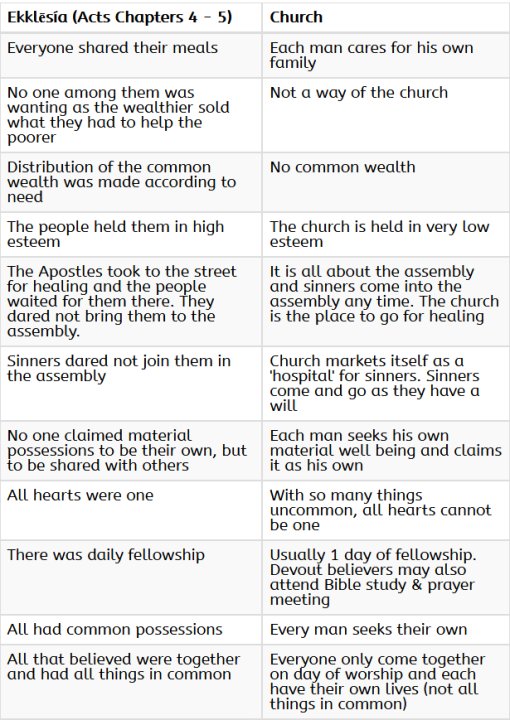 Frank52 · 61-69, M
[@542583,NoSugar] Not really. Jesus told us first to love God with everything we are - communism first looks to redistribute wealth and talks about the historical struggle of the workers against the owners of property. One looks to God for its anchor and is commanded to love all people: the other divided people around possessions.
+ 2

SW User
This is interesting. Have you read Francis Chan's "Letters To The Church"? He addresses a lot of these issues. It's a very convicting book. I feel like most of his stuff is solid.
+ 0 · Reply · May 26, 2019

CoffeeFirst · 51-55, F
[@886267,Imperatrix] I do not have that sentence. The OP has it in his head. Well, he didn't write it so I'm going to say that a good writer should have that summary in his head. I think his last 4 posts can be boiled down into one (long) thesis sentence. I have no opinion on the content because it doesn't interest me that much. If you want to read the rest of the post, look at the last 3 posts of his to get the entire article.

If the gist is that we should return to the ways of the early church in spirit, then that's cool.

Thank you for being kind about this. I didn't intend to sound bitchy originally. But I come off that way at times.
+ 1

BiblicalWarrior · 46-50, M
[@372602,CoffeeFirst] I believe that was the gist of this article, that we return to the spirit and practice of the original assembly.
+ 1

CoffeeFirst · 51-55, F
This was copied from another site on the internet, as well as the previous three (long) posts. You should give attribution unless you are (falsely) claiming you wrote it. Don't you think?
+ 1

Frank52 · 61-69, M
This is an interesting (and, as pointed out by Coffee First below, not original) binary opposition. I would regard this as a great discussion starter over actually what is written in Acts and what is perceived to be the modern church. Let's not assume that the manifestations of 'church' in the USA are universal when we consider the latter. However, I suggest that another simplistic division is not going to help the Church in it's calling
+ 1

CopperCicada · 51-55, M
The way I was brought up, unless one belonged to a brick and mortar church, then one was an apostate. These are a lot of the reasons people leave formal religion for solitary religious practice with family and kin, or for home churches.

Much of what you say about ekklesia also goes across the grain of the social and political presumptions of how faith should be expressed.
+ 0 · Reply · May 26, 2019

CopperCicada · 51-55, M
[@915083,BiblicalWarrior] largely, yes. i feel the spirit of the teaching is to have a very large and open table, really all of one's life. and the entirety of that is one's church. but what i agree with or disagree with is immaterial. i'm an apostate in pretty much everyone's eyes. so there's that. there is only one point i'm not sure about, and i'm pondering that...
+ 0 · Reply · May 26, 2019