Why do British schools still insist on uniforms?

[quote]Schoolboys who were banned from wearing shorts during heatwave turn up in SKIRTS to protest against 'outdated uniform policy'[/quote]
https://www.dailymail.co.uk/femail/article-9806803/Schoolboys-banned-wearing-shorts-heatwave-protest-wearing-skirts-instead.html 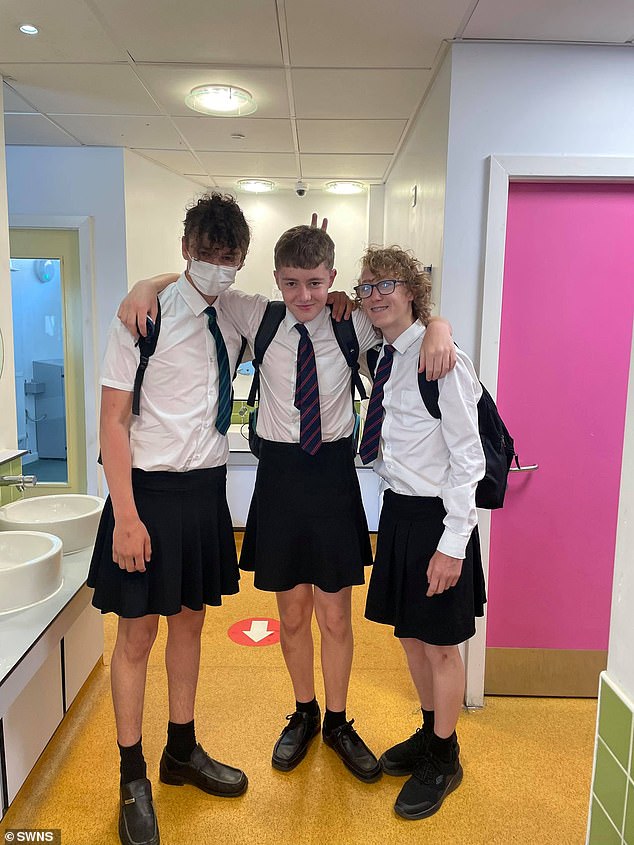 Picklebobble2 · 56-60, M
Because it installs a sense of discipline.
Funny thing is that as you go through school, you tend to start wearing your uniform in different ways.

Ties are rarely accompanied by a buttoned collar.
Blazers sometimes have collars turned up.
Skirts are sometimes fashioned with shorter than required hemlines.

Anything to express individuality in an environment that demands you all look the same !
+ 2

ninalanyon · 61-69, T
[@433246,Caroline259] [quote] too much of a coward to risk bullying girls in the same manner though.[/quote]
They just bully the girls in other ways like precision measurements of the distance from skirt to knee and banning pierced ears and certain hair styles.
+ 0 · Reply · 3 days ago3 d

Caroline259 · 56-60, F
[@872096,ninalanyon] Boys are also still bullied over pierced ears and hair styles. Sexism is rife in UK schools. Some allow girls to wear "delicate" jewellery and "discreet" make-up but boys are not permitted either. I wrote here about having to attend a school where a boy had collapsed as a result of having to wear a tight tie and blazer in extreme heat. Girls were permitted light summer dresses. What made it worse was that a colleague had been called to the same school to deal with a similar incident a few days earlier!
+ 2

ninalanyon · 61-69, T
[@433246,Caroline259] I had to wear a uniform at school but luckily our heads were much more humane. This was in the sixties and early seventies. I'm glad my own children went to school in Norway where school uniform is just not a thing; pupils wear what they like.
+ 1

MightyAphrodite · F
I live in Ireland, my kids wear uniforms, tbh, at least there can't be bullying over individual styles or people who can't afford the latest trainers or whatever, also the kids actually look better, there's a non uniform school near us, and my goodness the kids going home from there look very scruffy
+ 6

ninalanyon · 61-69, T
[@435994,MightyAphrodite] [quote]there can't be bullying over individual styles or people who can't afford the latest trainers[/quote]
Such a lack of empathy is something that the school needs to deal with. At least here there seems not to be much pressure to have the latest trainers etc. Some of the girls did go to great lengths to do their hair, put on make up and wear quite fashionable clothes and shoes as they got older. But you would see them in groups with other girls dressed in camouflage trousers, walking boots, and plain tee shirts, all talking together quite amicably.

Bullying of course does happen but uniform alone will not stop it and we have a had nationwide campaigns against bullying which have proven remarkably effective. It helps that there is a general dislike of people acting as though they are better than others here merely because of how much money they might have. And class distinctions are regarded with horror.

[quote]non uniform school near us, and my goodness the kids going home from there look very scruffy[/quote]
But that is a sign of poor leadership in the school surely? Or is it also a sign of poverty?
+ 2

NortiusMaximus · M
[@435994,MightyAphrodite] [quote]there can't be bullying over individual styles or people who can't afford the latest trainers or whatever, [/quote]
What about those who can't afford the uniform? Or are uniforms reasonably priced and obtainable from one's own preferred suppliers?
+ 1

Sirfurryanimal · 61-69, M
My old school now has uniform t-shirts and shorts for hot weather.
Far cry from my day.
+ 2

Picklebobble2 · 56-60, M
[@356742,Sirfurryanimal] When mine went to Secondary school the uniform changed to T-shirts with school crest; sweatshirts with school crest and the ubiquitous black trousers. For boys and girls.
Didn’t look ‘right’ to me.
But it was easy to wash, dry and fold than hours in front of the ironing board creasing shirts; skirts and pressing trousers.
+ 3

NortiusMaximus · M
There are three main reasons. A lot of UK headteachers are power-crazed dictators who like to make stupid rules just because they can. It feeds their delusions of importance and belief that the students are their personal property, to be used for the school's benefit.

Secondly, when academic results are poor, due to imcompetent teachers, they can blame it on the students being distracted by others who are "improperly dressed" and staff having to waste time ensuring students are wearing the correct uniform. It also give them an excuse to weed out low acheiving students from impoverished families that can't afford the overpriced uniform or have to go hungry to do so. Thankfully there are food banks so they don't actually starve to death.

Lastly, and by no means least, they're a cash-cow for the school. Schools insist uniforms are bought from the school approved supplier. To be approved, clothes' suppliers have to pay a very large (a few thousand pounds) "commission" to the schoool to gain such approval. That's why uniforms are so expensive, the supplier has to recoup that outlay but has a monopoly on supply. It's the poor, impoverished, families who have to suffer.
+ 2

Caroline259 · 56-60, F
As a paramedic I've had to attend incidents in schools that were almost entirely due to totally unreasonable school rules. I wrote about one here - https://similarworlds.com/random-subjects/something-say/2784912-I-was-called-to-an-incident-at-a-school-last-week

Another was an RTC a few years ago in a dark country lane. It was winter and the pedestrian casualty was wearing a dark coloured overcoat as prescribed by the school's uniform policy. I commented that it was a pity he didn't have a hi-viz vest or something similar only for his school friends, who had stayed with him, to tell me their school had absolutely forbidden students to wear them when travelling to or from school!
+ 2

Caroline259 · 56-60, F
[@872096,ninalanyon] We have similar things here. They're good but I think hi-viz vests are better. I have a feeling the school in question wouldn't allow students to use those reflectors either. It's one of those places where the headteacher's ego is far more important than the welfare of students.
+ 1

Lynda70 · F
"School uniform" is one form of fetish wear. Perhaps that gives a clue to why schools like to see boys and girls wearing it.
+ 3

ArishMell · 61-69, M
[@374012,NortiusMaximus] Those cases are appalling but on the whole limted to a handful of specific institutions.

Yes of course there were too many, with one particular organisation worse than all the others put together, but let's keep a sense of proportion and avoid suggesting all teachers must be incipient paedophiles thanks to a small number of bad organisations or because some adults like to wear school uniform for risque fun.
+ 1

Caroline259 · 56-60, F
[@519706,ArishMell] [quote]avoid suggesting all teachers must be incipient paedophiles [/quote]
It needn't be all teachers, just the one or two in charge. If they're careful they can avoid detection. One way was by only abusing boys because society wasn't too worried about what happened to them. Note how the majority of abuse cases involve abuse of boys. Some schools had a policy of only beating boys, just imagine the outcry and allegations if a school had a policy of only beating girls.

Seeing the way students (especially boys) are treated in some schools convinces me that they need to come under closer scrutiny of the way they operate. Sexism is very common and indirect racism certainly isn't rare.
+ 1

Nor can we judge the actions of school staff now with those of their forebears.

For one thing corporal punishment was outlawed in UK schools years ago - the 1980s I think - but when it was common ma ny parents at least tolerated or even supported it. The prevailing view was not to ignore it but to hold that if the school punishes you for breaking its rules, don't break the rules; whatever the form of punishment.

On the whole it did [i]not[/i] support abuse but neither did it think it wrong for schools to make and enforce rules. After all, if one purpose of education is to prepare pupils for a future employment and society, it has to prepare them to follow employers' and society's rules.

I have no idea how widespread negative or insulting "isms" are, "direct" or "indirect". Has anyone? I doubt it. I do not deny some do, and are wrong; but to what extent? Where? Some "isms" are real but "isms" seem too easy to invent. They probably vary considerably from region to region, country to country, too.

I think it is hard to establish partly because we seem to be evolving a grim, unforgiving, grudge-ridden society that having established some forms of behaviour as wrong - and yes, some are wrong if only by simple etiquette let alone justice - is baffled by its inability to establish sensible boundaries.

Consequently no-one dare do or say anything for fear of some third-party throwing "ism" accusations about, justified or not. As that unfortunate Olympics official found, merely for a joke he many years ago that was insensitive, but too unimportant to dredge up now.

All the growing tide of "isms-ism" can do is exaggerate the real problem, and worsen the fear and divisions we should be trying to remove; not by labels and pressure-groups, but by simple respect and humanity.
+ 1

Paulypeeps · 46-50, F
It is important that everyone gets to know what wearing a skirt is like, well I think that must be the reason...
+ 3