"Woe to one who is alone and falls and does not have another to help." Ecclesiastes 4, 10

I heard once that if a man is looking for a good woman, he should stop doing so, instead he should focus on becoming a good man. Everything else will follow.
Many people turn to Jesus when they have nobody else to turn to.
+ 0 · Reply · Jun 18, 2022
Translate 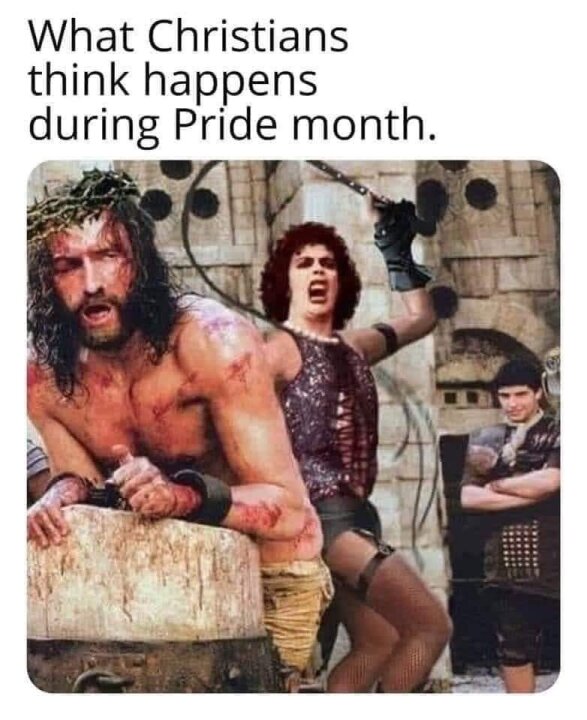 DocSavage · M
@AveMaria
[quote] the Bible inspired the leaders of the United States to unite everyone under one Faith.[/quote]
The founding fathers were against uniting the country under one faith. Especially Christianity. They wanted to keep the government and religion separate. That’s the whole point of the establishment clause
[quote] Congress shall make no law respecting an establishment of religion, or prohibiting the free exercise thereof...[/quote]
Jefferson was adamant about it. He was a deist, not a Christian.
+ 1

DocSavage · M
@AveMaria [quote] without Religion there's no union to form a culture, this is why every country that abandoned Religion has colapsed (Soviet Union is a good example)[/quote]
What about countries in which religion is part of government ?
Where eight year old girls can be married off to middle age men. Or murdered by their own fathers in “Honor Killings” because they dared to get an education. Or where gays are executed if they are caught ?
Still happens.
Religion clings to traditions which the rest of the world has outgrown.
+ 0 · Reply · Jun 19, 2022
Translate

AveMaria · 31-35, M
@DocSavage In the United States Religion, as you said, is not part of the government:
https://www.dailysignal.com/2021/12/13/what-ive-learned-rescuing-my-daughter-from-her-transgender-fantasy/
"My daughter was an ultrafeminine girl since birth. She insisted that her room be painted pink, and she refused to wear anything but dresses until third grade. She avoided her older brother’s toys and sports, choosing tea sets and Shopkins, a series of tiny, collectible toys.

Her favorite activity was to slip into my closet and don my few sparkly clothes and shiniest of heels. She rejected sports in favor of art and sewing."
"During that same time period, my daughter went through Teen Talk—a Manitoba, Canada-based program that says it provides “youth with accurate, [nonjudgmental] information” on “sexuality, reproductive health, body image, substance use awareness, mental health, issues of diversity, and anti-violence issues”—at her public school.

She came home with a whole new language. She and all her girlfriends discussed their labels—polyamorous, lesbian, pansexual. None of the five girls chose “basic,” their term for a straight girl. "

This is worse than what's happening in all of these countries, because it's war that's causing all the suffering you are describing, in the United States it's the government that's doing this to their children.
Children are learning they should mutilate their bodies, parents are suffering tremendously, this mother tried all she could and her daughter was still very young:
"I worked hard to take back the close relationship my daughter and I had once had. I bit my tongue until it bled. I took her anger and only responded with love or walked away when I knew I would respond poorly.

I caught her in vulnerable moments and hugged her or climbed into her bed. I stopped looking at her as though she were the victim of a scheme or a monster."

Children are being Abducted in Pakistan and other countries by Islamists.
https://www.bbc.com/news/stories-56337182

Christians should always promote the wellbeing of children and protect them, they are not being protected neither by Islamists nor by the United States.
+ 0 · Reply · Jun 19, 2022
Translate

DocSavage · M
@AveMaria
What about mutual consent ?
The Old Testament, no longer stands, and as far as law is concerned, a woman can have sex if she chooses, without getting married. An improvement over being forced to marry your rapist , wouldn’t you say ?
+ 0 · Reply · Jun 18, 2022
Translate

MafiaBoss97 · 22-25, M
@AveMaria That's an affirmative. Don't worry, bro. In my religion, even if you die a virgin here in this life Allah will give you pure spouses in paradise. Something that I'm really looking forward to. Sadly, i really need to become a better Muslim otherwise something much worse than this life will await me.
+ 0 · Reply · Jun 19, 2022
Translate

AveMaria · 31-35, M
@MafiaBoss97 @DocSavage
'Some subordinate their progress in perfection, which consists in denying their desires and likings out of love for God, to their own tastes and whims. So strong is this inclination that even if they are commanded by obedience to do something which is to their liking, they immediately lose their desire for it, and all interest in it, because their one desire is to do their own will.

The saints did not act this way.'
St. John of the Cross

Saint Cecilia was born in a Christian Family, but both her parents died, she Consecrated her Body to God, but her Tutor, who was a pagan gave her in marriage.
She didn't want to marry but the Holy Father told her she should leave everything to God, once she was married, she told her husband her body belonged to God and an Angel was protecting her, he told her that he'd only believe if he saw the angel with his own eyes, he was Baptized and Converted to Christianity and then he was able to see the Angel.
His brother also converted to the Faith, and both were martyred because they buried Christians, which was forbidden, Saint Cecilia buried them and later she too died and the Holy Father buried her next to her husband and his brother.
She's a Virgin she remained a Virgin all her life. Despite the fact she married, her body belonged only to God and God alone.
+ 0 · Reply · Jun 19, 2022
Translate · Edited: 1 week ago
318 people following
Catholicism Personal Stories, Advice, and Support