I've just had tacos for the first time in my life And it was such a b... | I Eat Food | Similar Worlds
Similar Worlds > Groups > I Eat Food > Post
I Eat Food
Follow
Upset
No Notifications
Only logged in members can reply and interact with the post.
Join Similar Worlds today »

I've just had tacos for the first time in my life

And it was such a bad experience! It didn't taste great but that was the smallest problem!

I couldn't even figure out how to hold it or from which direction should I bite first???!! And all the stuffing was dropping out of it! 😒

I mean, it's not like any kind of sandwich where the stuffing is tightly wrapped inside, neither is the stuffing stuck on top like a pizza, and it's not even served with a spoon?? How are you supposed to handle this?

KaliKali · F
Those are some shit looking tacos.
+ 2

Royrogers · 61-69, M
You usually fold them over and then eat them like a sandwich. I usually eat from one end to the other.
+ 1

Miram · 26-30, F
I am picturing you having this cultural clash in the restaurant. 😌 You close it tight and hold it horizontally and the pour food into your mouth like this

Or be a man and just do it like this

OogieBoogie · F
This is the tje fun of tacos .
They ARE a mess to eat .

But it's the amazing texture and taste combinations that are worth it.
The solidity of the meat , the tang of tje salsa, the moist crispness of the lettuce, and the base crunch of the shell.

But the taste and texture combination is complete.
😊

Forget being neat and demure, just close your eyes and enjoy the gastronomic delight that they are😜
+ 2

hdiddle · 26-30, M
Best way is to hold them upright and start eating them from the edges towards the middle 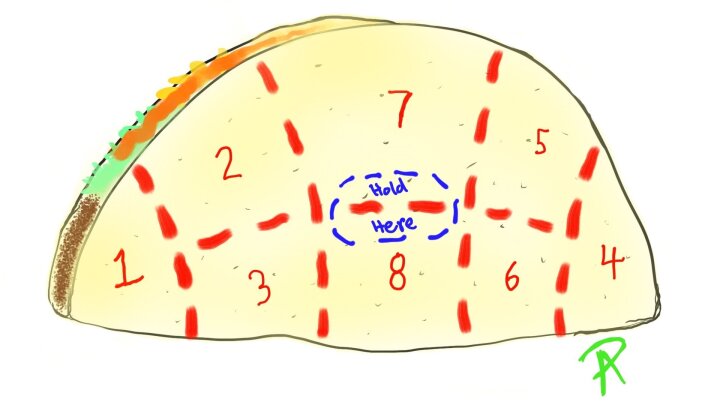 But yeah, in addition it seems you got some lousy tacos. The cheese isn't even melted
+ 2

Classified · M
I didn't like them either, but food that resists isn't bad in itself, is it? 🤔
+ 1

Stark
Poor guy. Being introduced to white ppl tacos Tilt your head to the side and bite the end of the taco. Also, corn tortillas is a great start to some good tacos. Then you need some good seasoned, flavorful meat. Last time I made tacos I marinated that shit for like 5 hours when I cooked it. It was a long process, but it was worth it. Then cilantro and onion and that’s it. You Dont need tomatoes lettuce any of that stuff. Stuff like that is only added as a distraction to bad tacos. All the flavor comes from the meat. You can dip it in some verde salsa or something like that tho, but it’s hard to find good verde salsa in my opinion. I use to go to this taco truck where I lived. Hands down best tacos I’ve ever had in my life. All of their sauces were homemade, very thick and hot af 🤤. Nothing has ever been able to compete. Because, I’ve been on the hunt for good tacos ever since I moved. Also, don’t give up on food so easily just from one bad experience. There’s so many ways to make food, and it’s cooked so differently giving up too early on something with that much variety is selling yourself short.
[image deleted]
+ 7

Stark
[@428450,MaterialGirlCx] tbh the first time I tried tacos were probably white people tacos too. Given my first taco experience was as a child at Taco Bell 🤣, BUT I DIDNT GIVE UP AND IM SO GLAD I DIDNT
+ 3