Home Groups People
The Chinese hieroglyph for ship is '8 person boat.' Some Christia... | Miscellaneous | Similar Worlds
Miscellaneous
Follow
No Notifications
Only logged in members can reply and interact with the post.
Join Similar Worlds today »

The Chinese hieroglyph for ship is '8 person boat.' Some Christian scholars have speculated it is a reference to Noah's Ark. 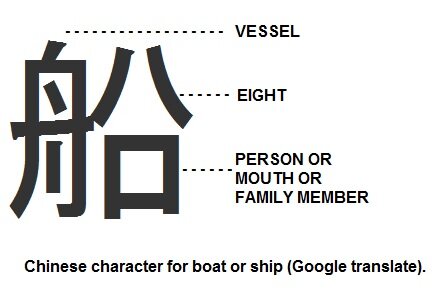 This theory has been met with some criticism (naturally), but It is interesting because virtually all Christians know the story of Noah's ark and there being only 8 people on the ship.

LoveTriumphsOverHate · 31-35, M
[@373024,DDonde]
Characteristics
The Chinese traditionally divide the characters into six types (called liu shu, “six scripts”), the most common of which is xingsheng, a type of character that combines a semantic element (called a radical) with a phonetic element intended to remind the reader of the word’s pronunciation. The phonetic element is usually a contracted form of another character with the same pronunciation as that of the word intended. For example, the character for he “river” is composed of the radical shui “water” plus the phonetic ke, the meaning of which (“able”) is irrelevant; the combined shui-ke suggests the word he meaning “river.” Seventy-five percent of all Chinese characters are of this type.

The other types of characters are xiangxing, characters that were originally pictographs (these have a semantic element originally expressed by a picture; for example, the character for tian “field” represents a field by means of a square divided into quarters); zhishi, characters intended to symbolize logical or abstract terms (e.g., er “two” is indicated by two horizontal lines); huiyi, characters formed by a combination of elements thought to be logically associated (e.g., the symbols for “man” and “word” are combined to represent the word meaning “true, sincere, truth”); zhuanzhu, modifications or distortions of characters to form new characters, usually of somewhat related meaning (e.g., the character for shan “mountain” turned on its side means fou “tableland”); and jiajie, characters borrowed from (or sometimes originally mistaken for) others, usually words of different meaning but similar pronunciation (e.g., the character for zu “foot” is used for zu “to be sufficient”).

Chinese script, as mentioned above, is logographic; it differs from phonographic writing systems—whose characters or graphs represent units of sound—in using one character or graph to represent a morpheme. Chinese, like any other language, has thousands of morphemes, and, as one character is used for each morpheme, the writing system has thousands of characters. Two morphemes that sound the same would, in English, have at least some similarity of spelling; in Chinese they are represented by completely different characters. The Chinese words for “parboil” and for “leap” are pronounced identically. Yet there is no similarity in the way they are written.
+ 0 · Reply · Nov 25, 2020
Edited: 5 mths ago

LoveTriumphsOverHate · 31-35, M
[@373024,DDonde] As I stated, neither theory is conclusive. It cannot be clearly established whether the logogram contains phono-semenatic compounds or is meant as ideographic. Yet you insist 㕣 is phonetically imposed. On what evidence do you base this inference on?
+ 0 · Reply · Nov 25, 2020
Edited: 5 mths ago

DDonde · 26-30, M
[@1164612,LoveTriumphsOverHate] The evidence I base it on is that every resource I have consulted tells me that 㕣 is the phonetic component of 船 and none of them have said that it is a semantic + semantic compound. I searched for a site that says the 㕣 is semantic and I have yet to find one. Meanwhile I have found many that say it's the phonetic component of 船. I would like to see where you are getting your claim that it is the semantic component from.
+ 0 · Reply · Nov 25, 2020
27338 people following
Miscellaneous Personal Stories, Advice, and Support