Remove Ads Get VIP
Home Groups People
What do you think about these transgender MMA fighters (men dressed up like... | Miscellaneous | Similar Worlds
Miscellaneous
Follow
No Notifications

What do you think about these transgender MMA fighters (men dressed up like women) able to compete in MMA fights against women, knocking the shit out

of female MMA competitors? They are men and they're dominating in the ring against women and the UFC and other MMA organizations allow it. One of them actually broke a woman's skull, lol. It is absurd. And when one photographer referred to a transgender fighter as a dude, he was banned from UFC. This is modern feminism. Lol.

SW User
He was born with a penis, therefore a dude.
+ 5

ShapeShifter2 · 31-35, M
[@327405,theoneyouwerewarnedabout] 😂 yeah and karate chop those little girls. I bet the feminists give you a standing ovation. You'll probably get a call from Michelle Obama telling you how proud she is of you.
+ 5

MalteseFalconPunch · 36-40
Trans people in sports is problematic. I dont know the answer because it isnt a simple issue.
+ 1

ShapeShifter2 · 31-35, M
[@663519,Mamapolo2016] Are you just saying that or are you serious? The fact that feminism has pushed the notion that men and women are not binary and transgender men are women, not different than any other woman, should be given rights as women, like the right to use public restrooms of their chosen gender, or the right to participate in sports of their chosen gender.
+ 1

raysam363 · 31-35, F
Had this conversation a while back, but unless hormones were started at or before puberty, there will be a "natural advantage" for physical activity. It's not very PC, but it's true.
+ 3

xixgun · M
Just men still looking for a way to beat on a woman. So excited to do it they'd cut off their own dick.
+ 2

Justmerae · 51-55, F
The world has gone mad.
What did they think would happen?
Same reason why I try to get it through people's heads that a man should not physical punch a woman.
They are very much stronger than we are.
If I hit a guy hard as I can in the stomach it might hurt him and I might even wind him, but he's going to break my ribs if does the same to me.
This is reality.
+ 3

2Buddies · M
[@2144,Justmerae] [quote]"Same reason why I try to get it through people's heads that a man should not physical punch a woman."[/quote] Neither should a woman physically punch a man. No one should be violent against anyone. That's assault.
+ 1

Justmerae · 51-55, F
[@883048,2Buddies] you kind of missed the point. I'm not saying a woman should hit a man. I'm talking about the difference of what happens when a woman punches a man and when a man punches a woman. Men do much more physical harm, this is fact.
So, when idiots say if a woman hits he should hit her back, that's stupid, sorry.
Nobody's advocating violence.
But, if a child hits an adult do you think the adult should hit the child back?
Of course not, because the adult would afflict much more damage on the child compared to what the child would afflict on the adult.
+ 0 · Reply · Nov 6, 2019
Edited: 1 yr ago
This message was deleted by its author.

2Buddies · M
Well let's see, social leftists sent their rooster out in the morning to go and screw others and are shocked now that it came around at night and is screwing them. 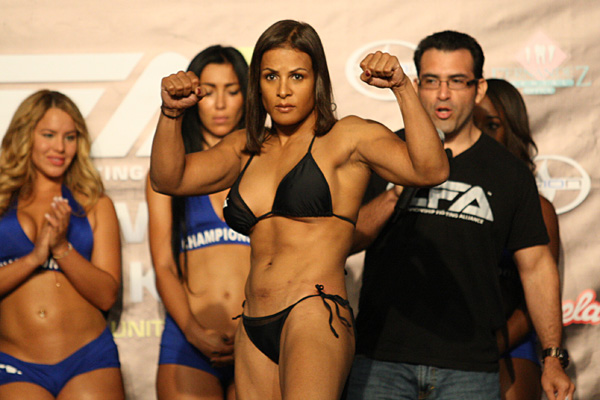 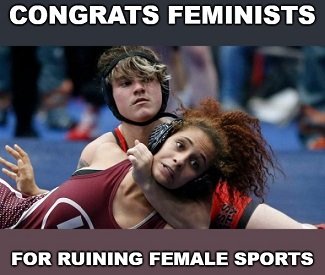 Thank you feminism! Your social experiment has worked just fine! We are now witnessing the end of women's sports. 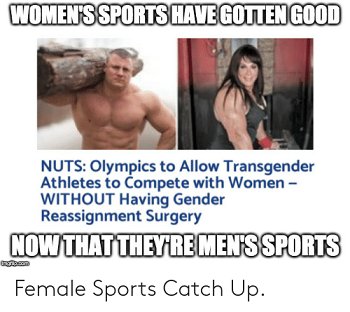 Ultimately, both signed on the bottom line.
+ 1

ShapeShifter2 · 31-35, M
[@883048,2Buddies] 😂 this is absolutely insane and you know what? If this is what it takes to make people wake up then maybe this is what needs to happen. Those females need to take a stand and say something. Why on earth would they think they can compete with men? Are they afraid to say something?
+ 1

2Buddies · M
[@1034064,ShapeShifter2] You can hear the confusion in their voices. The same confusion the veminists threw at us in decades past with this "men and women are the same" bullshit, until it disadvantages them - then they change their tune. That's called lying and what we've been subjected to forever. Now that the shoe is on the other foot, I'm thoroughly enjoying [b][i]their[/i][/b] confusion with full schadenfreude.

Btw did you see the Canelo vs Kovalev fight this weekend? I called it in the exact round for Canelo at the fight party.
+ 1