And by that I don't mean sexuality or attraction, but sex itself. Maybe it's because I'm thinking about it from a perspective of muscle weakness, hypermobility and exercise intolerance, but how do people even do it?

I for example need a break after two jumping jacks. Pelvic thrusts are different of course, but I don't understand how people keep that up for several minutes. Even if I could do that, it seems like very hard work that makes it difficult to enjoy any other aspect of it.

TheBungler · 22-25, M
The emotional aspect of it is a huge part of my reason for why I enjoy it, and fapping will never be able to compare in that way.
+ 4

TheBungler · 22-25, M
[@1125975,PhpPhoenix] Cause you’re sharing that moment with someone who you ideally love and have a strong emotional bond with, and seeing them enjoying the act and knowing you’re making them feel that way is very satisfying and fulfilling. To me that’s an expression of love. Plus cuddles afterwards are always 10/10.
+ 3

Peaceful · F
Sex is one of the most intimate things we do.

As long as there is a real connection, which it seems you are striving for.
+ 2

PhpPhoenix · 31-35, M
[@21448,Peaceful] yes, I definitely do. Without an emotional connection I'm not interested in any form of physical intimacy.
+ 2

saragoodtimes · F
sex confuses me too. sometimes it's so intense I become a babbling idiot afterwards
+ 3

ginnyfromtheblock · 22-25, F
i mean, a hand job doesnt have any effect on the person giving it. that doesn’t make people who can’t have penetrative sex less valid, but there’s something intimate about the mutual satisfaction thru just one act

PhpPhoenix · 31-35, M
[@1029172,ginnyfromtheblock] good point! Pleasuring each other simultaneously instead of taking turns is definitely a unique benefit.
+ 1

ragingfire · 31-35, M
In only physical sense, exercise doesn't have the pleasure part involved in it. You have to push through pain and take breaks in between. The end goal shows up after months and sometimes years.

Sex in the other hand isn't similar to running a 100 meter dash, benching 300 lbs(with some exception depending on who you are with), or doing jumping jacks where you have to work agains't gravity where you have to propel your whole weight up. You are basically laying down or well supported and there's only some range on motion of the pelvis area(talking from male's perspective, unless you wanna do acrobatics. No judgements there) . Also, I don't think most people are capable of that athletic level intensity in bed and if they do, they may run out of breath, but there's an end goal which they get in very shorter period of time compared to exercising. It's a gratification which keeps them going. Also, with every thrust there's pleasure for the man and if done correctly combined with other things, there's pleasure for woman too.

As others have said, connection, putting your partner's pleasure at equal level as yours or above that, love all comes into play, but when it talk about the only physical side of it, I don't think most would be blowing their gaskets in the bed.

If exercising = sex, in this sex obsessed society no one would ever go out of shape.
+ 1

PhpPhoenix · 31-35, M
[@429468,ragingfire] of course burning calories and building muscle isn't the goal. The exercise is part of the way towards gratification though I'm wondering how people manage to do that.
+ 1

As far as your comparison to exercise goes - that's hardly a fair one because, when you go to the gym, you can't turn round to your partner and say "Here, you take control for a while" like you can during sex.

There's also the point that sex is more like instant gratification - your end goal is to orgasm and enjoy yourself and your partner. You aren't going to enjoy caressing your running machine in quite the same way as you would doing the same thing with your girl.

If you're working out then you are going to get sore... and who's going to stop and just massage the cramp out for you - without it looking creepy. At least, in bed and during sex, you can get away with that without ruining the moment too much.
+ 1

PhpPhoenix · 31-35, M
Btw, this whole post was inspired by something I read: 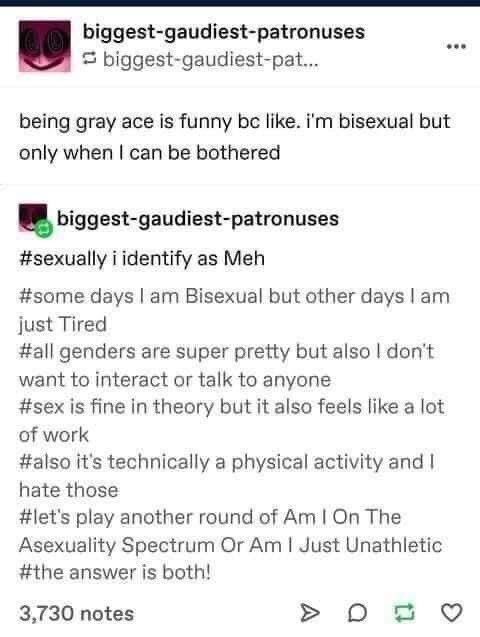 Miram · 26-30, F
Loving romantically, seeing them to their core, feeling all the aspects that make them who they are, knowing them including how and what they become when vulnerable and open, when under your sensual touch and kisses..When given everything they desire and more..All of that is special and it changes you.

Making love is like art, it's not the same for everyone. It's like wielding the perfect plectrum for her strings..It's like finding a song within you and finding the perfect musical tones to express it.
+ 1

Aidolovemostofyourthoughts · F
But ...you get to lean against pillows and stuff and you can change positions.😂
Good sex doesn't feel like hard work because you're just going with the flow. You're not in the mind, but in the body.
+ 2

MyaJhonston · 18-21, F
it's a bit like trout.
it all tastes the same on it's own, but what you pair it with changes the experience in different ways.
+ 1