Evils in the world .... ▪Globalism ▪Environmentalism ▪Atheism ▪Science The... | Community | Similar Worlds
Community
Follow
Random
No Notifications
Only logged in members can reply and interact with the post.
Join Similar Worlds today »

Ceinwyn · F
Hmmmm I don’t know. 🤔 I can think of many wars over religion, I can’t think of one where atheism was a factor. Not that I’m an atheist.
+ 1

questionWeaver
[@1189891,Ceinwyn] once again ... two sides to those conflicts ... most were disputes that gravitated to battles along ethnic and later religious lines.

The absence of religion would not have eliminated a single one of those conflicts.

And religion did not ignite a single one of those conflicts.

They were in the category of ethnic wars ... and land wars.

Ceinwyn · F
[@6757,questionWeaver] Well by that reasoning Hitler being an atheist had nothing to do with him invading Poland.
+ 1

questionWeaver
[@1189891,Ceinwyn] good point and quite true ... that was simply a land grab by a man without a moral compass.

The absence of a moral compass has led many people and leaders to bad decisions.

Atheism, by its definition, refutes the moral compass of all religions

Thus, those self-identifying as atheist are more likely to not consider grace, charity, joy, forgiveness, hope and love ... in decisions regarding use of force.

Thus, atheism does not make them dangerous ... but it does warn ALL OTHERS that they could be a danger.
+ 1

questionWeaver
[@6602,helenS] there are two sides to every conflict ... in a war of religion ... there is one side that believes and one side that does not 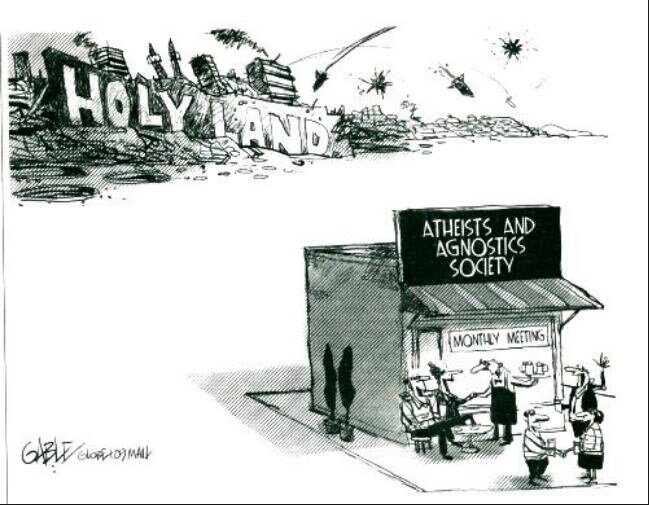 Coletracer · M
When I first glanced at the title I thought it said Elvis in the world... ok...sorry!lol
+ 3

ImperialAerosolKidFromEP · 46-50, M
I wouldn't give atheism so much credit
+ 1

Adogslife · 61-69, M
How do you tie religion and terrorism into the , “…source of all world conflict.” equation?

Both religion and terrorism are media explanations for conflict.

Reality is neither are a true source of conflict.

The impression that religion and terrorists are at the root of conflict, is exploited by those with personal objectives.

Environmentalism, anti-religion have replaced Isolationism and religion as the way countries respond to threats ... it is the new "attack mode".

Science has replaced the Goebels proproganda method ... but is the same thing.

Together, they support the human effort to conquer masses.

Religion has not started wars in a long time.

They just exploit religion and terrorism, to conceal their true objectives ... and none are Godly.
+ 1

Adogslife · 61-69, M
[@6757,questionWeaver] I’d have to digest your answer further before completely absorbing your viewpoint. But, I’d certainly cite this as a perfect example of how slightly differing opinions can and should be expressed on SW.

I appreciate you taking the time. Ty.
+ 1