Home Groups People
If you don't believe in at least some conspiracies there's someth... | Politics | Similar Worlds
This post may contain Adult content.
Politics
Follow
AdultNews
No Notifications
Only logged in members can reply and interact with the post.
Join Similar Worlds today »

The government is known to lie and be corrupt. Conspiracy theorists are always mocked cause some are crazy. But whenever they're right they're given no credit at all and it's ignored. People were called crazy and paranoid for saying the government spies on you, Snowden proved they do. Alex Jones for saying Epstein is a child predator that has a secret island he invites rich people to. That was proven true. Heck, it was probably a conspiracy at one time to say Hitler is evil or that priests touch young boys.

curiosi · 56-60, F Best Comment
Conspiracy theorist is a derogatory name made up by the CIA to shame free thinkers into believing the lies they spew. I am proud to be a conspiracy theorist!
+ 5

WanderingThrough · 26-30, F
Absolutely. I’m inclined to believe that most conspiracies are false, but there are definitely some that are true. Conspiracy theorists don’t often go about proving their theories very well though.
+ 2

causernamebemyusername · 26-30, M
There is more to conspiracy theories than the conspiracy. It is a whole collection of mental issues such as low critical thinking skills, paranoia, self importance, and disordered pattern recognition.
+ 3

· Reply · 4 days ago4 d
View 8 more replies »
This message was deleted by the author of the main post.

Rolexeo · 22-25, M
[@422868,Burnley123] Already named some of the evidence for that, QAnon is bs, no Biden totally got the most votes in history dedpite nobody liking him or attending his rallies, not letting poll watchers in, boarding up windows, not counting ballots for days and him winning in the remaining states he was losing in and getting 100% of the remaining votes, the courts not looking at the case, vids of ballots being ripped up, all of the 100+ year olds voting etc, no evidence at all. A lot changed after 9/11, you don't think that was at all planned? You don't think there's airport security? When was the last time a plane got hijacked?
+ 0 · Reply · 4 days ago4 d

Mrsbetweenfatandfit · 26-30, F
Unless the conspiracy theories are plants to distract those looking for the real answers from ever finding them 🤯
+ 1

· Reply · 4 days ago4 d
This message was deleted by the author of the main post.

YourMomsForbiddenCrush · 51-55, M
Yeah, its kinda odd that all of a sudden people put their faith in big pharma to do the right thing in regards to our health. and Bill Gates is a billionaire expert on medicine and global weather patterns. a whole lotta sheep are buying what their masters are selling. folks convinced that they must ride around in their car alone with a mask on to protect themselves from a virus. these same folks call the rest of us conspiracy theorists. LOL
+ 3

ok....i'll try to be more gentle.
Whatever source you read and believed was incorrect. I assumed it was facebook because it was a viral facebook post which is chiefly responsible for spreading this disinformation.
You can look up for yourself that the BMGF nor Gates himself have been kicked out of India and Gates has long advocated for controlling population [i]growth[/i], a goal to be achieved be [i]lowering[/i] infant mortality,
+ 1

[quote]Yeah, its kinda odd that all of a sudden people put their faith in big pharma to do the right thing in regards to our health.[/quote]

I think that's probably a mischaracterization of the situation.
I think what people are doing is trusting big pharma to produce medicine that works because that's how they make money. If the vaccines don't work then no one is going to buy them and big pharma loses money. Big pharma does not like to lose money.
+ 0 · Reply · 4 days ago4 d

Benjr134 · 36-40, MVIP
To be fair Epstein was pretty common knowledge amongst certain circles. I’m not even talking about the people involved. Cory Feldman has been talking about stuff of Epstein’s nature for a very long time. Almost 30 years. You are correct people did think he was crazy and it didn’t help that he does suffer from mental illness but still.
The biggest problem is that we all know the government doesn’t truly have our best interests at heart but we’re afraid to truly believe how far they’d go. This in light of not remembering that even North American governments have done some pretty horrific things to people of colour. That’s why I never trust what the government has to say about most things and approach friends and family who work in the area in question. If I don’t have a friend or family I look up experts without any government affiliation but are also trusted by their peers.
+ 3

Benjr134 · 36-40, MVIP
[@16806,cherokeepatti] It’s very true he and Corey Haim were very much taken advantage of. I met Corey Feldman a few years back and he’s a very nice person. The gaslighting not just around his situation but around anyone that tried to bring this to light is horrible.
+ 1

Benjr134 · 36-40, MVIP
[@16806,cherokeepatti] Well I read an article that CEO’s and top actors all these people in these powerful positions if analyzed would most likely be considered sociopaths. So it’s not surprising but I’m glad we’re finally seeing a change even if that’s not a huge change.
+ 1

Graylight · 46-50, F
Snowden didn't prove the government spies on us. He verified they collect anonymous metadata and filter for very specific identifiers and cautions. (And we already knew this.)

Alex Jones has spread so much rich and potent fertilizer around this country that it's simply within the law of averages that one thing is going to turn out to be true. However, Jones must have made is big statements prior to 2006, which is when an underage prostitution charge was filed against Epstein.

A cover-up is not a conspiracy necessarily. A conspiracy is a plan by multiple parties to secretly cause harm or illegal acts. Both happen, but in the case of the former the truth is this: the public does not have a de factor right to know anything they want at any time they want via any source they want.
+ 2

SumKindaMunster · 51-55, M
[@627992,Graylight] [quote]Snowden didn't prove the government spies on us. He verified they collect anonymous metadata and filter for very specific identifiers and cautions. (And we already knew this.)[/quote]

Snowden chose to go rouge and release the information proving the NSA was illegally spying on Americans after James Clapper, then Director of National Intelligence straight up lied to Congress about the existence of this spying program.

And Snowden had plenty of data showing analysts routinely abused their position and spied on Americans illegally.
+ 1 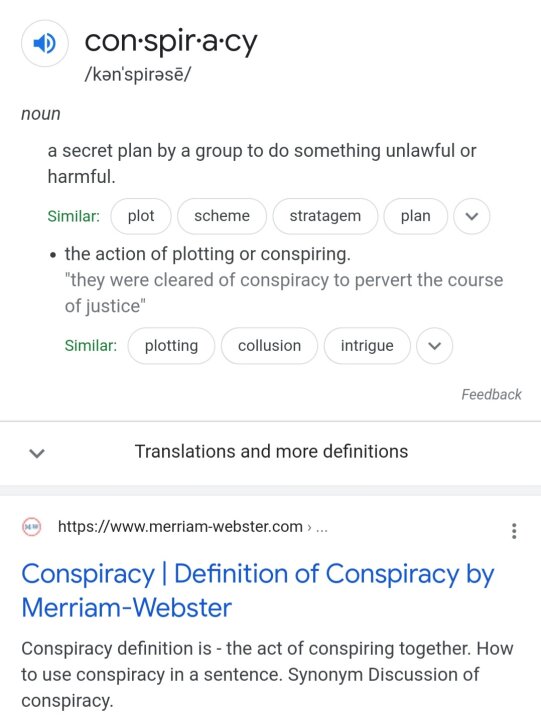 SomeMichGuy · M
[@1201398,Rolexeo] Conspiracy at its base is about more than one person being involved.

Your first source is mixing in connotation with the denotation. It was the murder of JFK which generated theories of more than simply a "lone gunman"...any the addition of just one person makes it a conspiracy. It waa that event which created the misperception of "conspiracy" as being crazy, etc.

[quote]Alex Jones for saying Epstein is a child predator that has a secret island he invites rich people too.[/quote]

This is the classic broken clock being right twice a day. 🤣 I almost feel that Alex Jones got this right by accident. If you trumpet EVERY conspiracy theory on the planet then eventually the law of averages says that one of them is going to be right. It doesn't prove his good judgment LOL.

I think to decide whether a conspiracy might be credible, you need to ask the following three questions:

1) Would rich and powerful people benefit from most people believing it?
2) Does it have a credible narrative that makes sense?
3) Would it be worth the risk of exposure?

Pizzagate and QAnon pretty much [i]fail on all three counts[/i]. That the US and British Government's exaggerated Iraq's WMD capacity to invade Iraq [i]passes [/i]all three.

Something like '9-11 was an inside job' arguably passes the first two. The US establishment already wanted to get rid of Saddam and the Taliban. The US wanted to expand power in the ME and have more access to oil etc. However, it fails the third test because there is no way you would have been able to keep it a secret and the risk of exposure would have been catastrophic. So no.

So some conspiracies are true and others not. You need more reasons though than Alex Jones says so.
+ 3

I said that Pizzagate was ridiculous and an insult to conspiracy theories.

False premise, if that were true why did Epstein get away with it for so long?

Even after I corrected you, look at the emails
+ 0 · Reply · 4 days ago4 d
This message was deleted by the author of the main post.

deadgerbil · 22-25, M
Some conspiracies stay close enough to established facts to where they can be taken seriously. It's interesting reading about stuff regarding JFK's assassination.

My interest in that doesn't compel me to take seriously some of the outlandish conspiracies, like where Hitler escaped Germany and lived elsewhere.
+ 0 · Reply · 4 days ago4 d

MalteseFalconPunch · 36-40
I only call them conspiracies when they are constructed top down.

CountScrofula · 36-40, M
Sure, there's been loads of conspiracies which are real and true. They're also usually pretty obvious.

The issue is that the classic conspiracy theorist conceives of impossible conspiracies with no particular purpose or even end point.

Like Alex Jones' worldview is that most political behaviour on the planet is driven by some sort of shadowy cabal of globalists who do bad things to some vaguely determine hostile end point.

I am happily to believe conspiracies that are -true- but the Alex Jones and his fans do not differentiate between Epstein and Sandy Hook. And if Epstein was a Republican, Jones would be talking about how he was set up.
+ 4

· Reply · 4 days ago4 d
This message was deleted by the author of the main post.

Rolexeo · 22-25, M
[@731023,KaiTheHuman] Nope, I plenty of comments here of people who disagree with me, they're still up, cause they were rrspectful. You see what you want to see. Get your racist punk ass out of here, fucking loser.
+ 0 · Reply · 4 days ago4 d
This message was deleted by the author of the main post.

checkoutanytime · 41-45, M
There is nothing wrong with questioning the authorities narrative, look at the laws they purpose. If it's not marx, its woke, basically elite think they are most important is what the last century teaches U.S. .
+ 2

MotherHubbard · 56-60, F
The main thing not to question is global capitalism without global democracy. No team playing against us, just God and the fact we're licked.
+ 0 · Reply · 4 days ago4 d
Edited: 4 days ago

PrincessAwesome · 18-21, F
This is actually why people like Alex Jones are so dangerous. He muddies the water with his fake conspiracy theories.
+ 1